From DOS to iOS: AIDA64 celebrates its 20th anniversary with new mobile apps

FinalWire released the smartphone edition of its leading system information utility, AIDA64 for iOS and Windows Phone. With the new apps, iPhone, iPad and iPod touch owners as well as users of Windows-based phones and tablets can get accurate information about the hardware that powers their devices. The GUI of the freely available apps uses the design language of the platform to ensure that users feel at home when navigating the graphical user interface.

“These applications complete the AIDA64 mobile portfolio, and we do hope that the utility will be just as popular on iOS and Windows Phone as on Android. The Android app has been downloaded more than 160,000 times since its release early March”, commented Tamás Miklós, lead developer at FinalWire. “It was exactly 20 years ago this month that we started the development of AIDA64, and we have come a long way since the DOS-only first edition. Just like in the past two decades, we will continue to do our best to follow hardware technology innovations and to provide the most accurate hardware and software information to our users.” 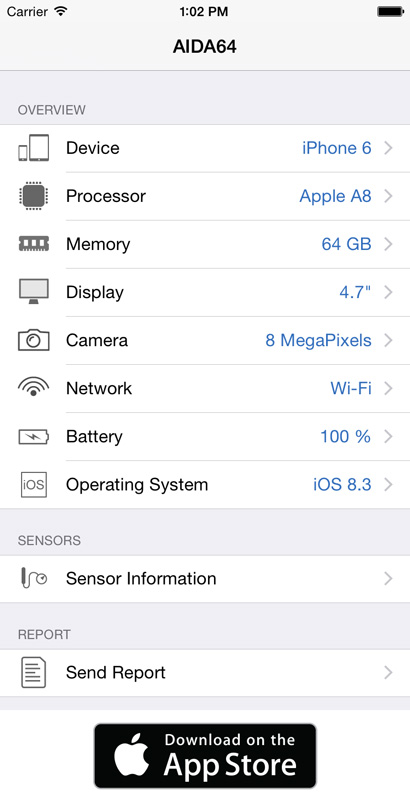 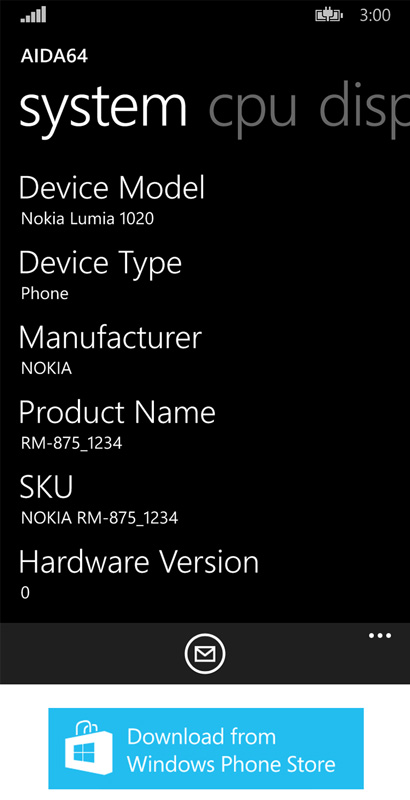 The freely downloadable iOS and Windows Phone apps are made available on the 20th anniversary of AIDA64. The development of the first predecessor of the utility, which has since become a quasi standard in system information and diagnostics, started in June 1995. Running on DOS, the program then called ASMDemo provided basic information about the PC's hardware and software environment and became publicly available in 1996.

The iOS app, which requires iOS 7.0 or later, can be downloaded from the App Store for free. The Windows Phone version, which can be installed on Windows Phone 8.1 and Windows 10 Mobile Preview, is also freely available in the Windows Phone Store. Currently, both apps have an English user interface.

FinalWire plans to update the Windows Phone app to UWP (Universal Windows Platform) in the second half of 2015, which will allow a single app to run on all Windows devices, including Windows 10 based PCs, smartphones, tablets, Xbox and even the HoloLens.

AIDA64 is developed by FinalWire Ltd., headquartered in Budapest, Hungary. The company's founding members are veteran software developers who have worked together on programing system utilities for more than two decades. Currently, they have seven products in their portfolio, all based on the award-winning AIDA technology: AIDA64 Extreme, AIDA64 Engineer, AIDA64 Network Audit, AIDA64 Business and the Android, iOS and Windows Phone apps.
Download latest AIDA64